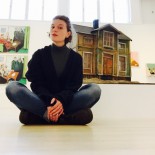 Exhibitions are a tool, not the result. Art should open up for a democratic dialog and rethink the ‘ordinary’ exhibition practises. Martha Rosler: “art make difference to a social movement only when it is made in cognizance of those movements.” . Exhibition making can be a model of resistance, a tool and not the result.

During 2015 Box will conduct a series of talks with focus on sculpture. For the first one, London based artist Rose Gibbs, curator Sofia Landström and artist/curator Josefina Posch will discuss their mutual interest in the complexities of “Women Only Shows”. Taking as a point of departure Posch´s upcoming networking project “Sculpture HUB” that focus on Nordic women sculptors, the talk will progress and expand into a discussion concerning dissent, models of resistance as well as Gibbs and Landströms curatorial/art collective “The Temporary Separatists” and their upcoming project “Views All My Own” that explores women only collectives.

To participate in the network meetings and exhibition please visit SCULPTURE HUB.

For the past few years curator Sofia Landström has focused on the analysis and writings concerning feminism, exhibitions and feminist theorizing. Her interest for exhibitions as a place for discussion and dialog began during her time as chairman at Galleri Pictura in Lund, where she realized how the exhibition premises not only encompasses that what is hung on the walls but is also influenced by everything that is taking place outside; politics, economy and social changes. Landströms current interest takes departure in the `Women-Only-Shows´ concept, using three Swedish exhibitions as starting-point; `Kvinnfolk´ (1975) , `Störning´ (1993) and `Syster´ (2014). She investigates questions surrounding dissent but also in what way these exhibitions can be seen as `models of resistance´ where new narratives are being created as oppose to ghettoized phenomenon. At the moment Landström is in the middle of finishing up her MFA in Exhibition Studies at Central Saint Martins in London.

Rose Gibbs uses sound intervention, sculpture and participatory performance as a way to consider the possibilities of consciousness-raising. Most recently she has used speech and the voice as a way to explore how iteration and re-iteration affects our feedback loops. She questions if we can become something other than we are, if we can escape our own reflexive loops, by experiencing and speaking other people´s words. She uses the voice to explore the space between the collective and individual experiences of identity, inviting participants to join communal readings. Similarly her objects become an invitation for group making, where the object can serves as a vessel for temporary community and conversation, creating a provisional space or carrier for a coming together in group action. All of these are attempts to reconsider the dual program of feminism: both a method that seeks to recognize gendered group treatment, while also finding a route to autonomy and liberation from such categorization, where these two aims are often felt to be at odds with one another. Her practice seeks to reflect and harness this oscillating movement in an attempt to disrupt ideological hegemony without resting easy.

London based Rose Gibbs has organized the discussions; Taking Up Space –Women Only Shows – hosted by The Contemporary Art Society and Central Saint Martins, as well as a Reproducing Motherhood at Shoreditch House. Recent performances have included Performing Protest, Becoming Radical and Slogans for Becoming at The Function Room London, and Invitation at Wysing Art Centre. She writes a blog for Huffington Post, and works with the grass roots feminist activist organization The East London Fawcett Group and in 2013 was director of The One Billion Rising Arts Festival.

Gothenburg based Josefina Posch works with a number of different techniques and media; installation, drawing, sound, aromas and social experiments – always from a sculptors perspective. She explores the dividing line between the private and the public, working with the tension between a scientific and a voyeuristic form of observation, with focus on the point where technology, cloning, averages, ideas and fiction meet. Posch has had solo exhibitions in Sweden,China, USA and the UK and participated in several Artist-in-Residencies around the world. Posch is also active as a curator and is the founder of Snowball Cultural Productions that organized and produced exhibitions and seminars such as;
nordic art / Between Miracles at CCA-Tbilisi, Georgia and the Nordic Tour of the Guerrilla Girls. Currently Josefina Posch is developing a network and seminar series titled; Female Sculptors as forum for dialog concerning dissent and 3D art, that focuses on Nordic Female Sculptors, supported by the Nordic Ministry of Culture. Since 2012 she is gallery manager at Galleri Box and representative on the IASPIS Gothenburg chapter board.

This entry was posted on March 4, 2015 by Sofia in Artists, Critique, Curators, Exhibitions.